The international business visitor to Manila, the Philippine capital, will usually find him- or herself in Makati City, one of the seventeen cities which make up Metro Manila, Makati City is the financial capital of the Philippines, and is home to sleek modern commercial buildings, upscale shopping malls and luxury hotels as well as foreign embassies, consulates and missions.

There are half a million inhabitants in the 27.36 square kilometers of this district, making this the 44th most densely populated city in the world. Makati has a wonderfully multicultural feel with its large expatriate population who live and work in the area; and, unlike many CBD areas in other cities, the sector also comes alive at night as a major entertainment and dining locale.

The Servcorp office in Manila is located right in the heart of this prestigious neighbourhood, in the area known as the Ayala Triangle. The Triangle is a zone bounded by Ayala Avenue, Makati Avenue and Paseo de Roxas. Sleek, modern buildings line each of these wide boulevards.

The Philippine Stock Exchange is located here, as are the offices of many multinationals, including Microsoft Philippines, Intel Philippines, Proctor and Gamble, Nestlé, Shell and many more. An interesting historical sidenote: Ayala Avenue and Paseo de Roxas were once former runways for Metro Manila's main airport, Nielson Field, back in the 1930s!

Juxtaposed against the bustling, fast-paced urbanity of Makati are the beautiful Ayala Triangle Gardens, open from 6.00 a.m. to 10.00 p.m., a landscaped oasis comprising approximately 20,000 square meters of rain trees, palms and other lush greenery. In late 2010, a new commercial area with restaurants, bakeries and cafés opened here, making this an ideal spot for casual meetings, taking a break or simply people-watching with a cup of coffee. Wi-Fi hotspots abound here for those who simply cannot get away from their work.

This district is an easy twenty-minute drive from Manila's International Airport and a ten-minute walk to the Ayala Avenue MRT train station. Ayala Triangle is also home to five-star hotels, restaurants and exclusive shopping. Servcorp's Philippines Serviced Offices are located on the 22nd floor of the landmark Tower One Ayala Triangle, right on the corner of Ayala Avenue and Paseo de Roxas, near the Ayala Triangle Gardens.

The Servcorp office, which includes the Servcorp Serviced and Virtual Offices, provides a comprehensive range of facilities – including high-speed broadband access, IT support, videoconferencing and dedicated receptionist and personal assistant services –  making Servcorp a one-stop resource and support provider for any company looking to do business in the Philippines. 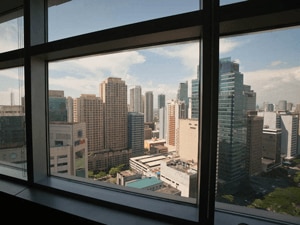