The Philippines has come a long way from its previous role as the 'poor man' of Asia, when the two-decade rule of President Ferdinand Marcos (1965 to 1986) was widely acknowledged as being one of the major reasons of the country's failure to realise its potential as an emerging Asian economy during the boom of the 'Asian Tiger' economies in the early 1990s.  During Marcos's rule, many documented cases of official corruption and cronyism led to a disastrous state of affairs in the Philippine economy.

The 'People Power Revolution' of February 1986, which saw Marcos being removed from power and exiled to Hawaii, marked a turning point for the Philippines, and a new hope emerged that the country would finally catch up with its Asian neighbours – Malaysia, Singapore, Hong Kong and Thailand – in terms of economic growth and expansion.

The 'Philippines 2000' economic plan saw the privatisation of key industries such as banking, telecommunications, electricity supply, oil and shipping, and these policies have helped to improve and transform the country's economy. Today the Philippines is known as one of the 'Tiger Cub' countries of Asia – strongly emerging economies in the region with abundant wealth in human and natural resources – fast catching up with the more established 'Tiger Economies' of Hong Kong, Japan, Singapore and Taiwan.

Most recently the Philippines has been capitalising on its strong workforce and the rapid growth of its services sector, which contributed to 53.2% of the country's GDP in 2006. The Philippines telecommunications, business outsourcing and financial services sectors have made the country one of the fastest-growing Back-Office Processing (BPO) providers in the world. The English-speaking, technologically-savvy young workforce, concentrated in the major locations of Metro Manila and Metro Cebu, provide services for major international companies. These services include data entry, online research, invoicing, human resource and IT services as well as many other back-office tasks for companies across the spectrum of industry sectors.

In September 2010, Servcorp established its first office in Manila, in the prestigious Tower One Ayala Triangle, within the heart of the Makati City Central Business District, the financial centre of all major business activity in the Philippines. The emerging strength of the Philippine economy can be seen today in the vibrance of Manila, and Servcorp is there to assist your company's expansion into one of the most exciting economies of the Asia-Pacific region. Servcorp's services in the Philippines include Serviced Offices, Virtual Offices as well as a Philippines Business Registration Service. 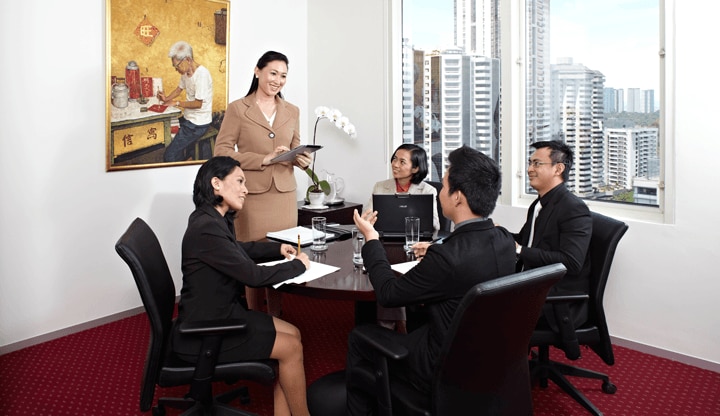