The Philippines has a come a long way in terms of big time players in valuable and influential corporations solely owned by Filipinos. Since the country's independence from the United States of America in 1945, enterprising Filipinos painstakingly made their way into building their current business empires from scratch.

It is not as easy to qualify the meaning of “big business” as it could pertain to the size of the company in terms of number of employees, their gross revenues, their market values, market capitalization, their assets and profits.  Basing it on each qualifier, no corporation is ranked the same. Take Ayala Corporations. The company ranks eighth in terms of the biggest corporations in the Philippines but it is ranked fourth in market value; and ranked sixth in assets and profit. According to Forbes, Jaime Zobel de Ayala is the sixth richest man in the Philippines.

It is best to present big business players in the Philippines in terms of their growth from a small company to the business empire that they are now.

Top 8 Corporations in the Philippines

United Laboratories - The company started as a small drugstore back in 1945. Through the years, it made its mark as one of the leading pharmaceutical companies in the country, as it provides quality medicines that are affordable prices. The company eventually went into the production of its own line of pharmaceuticals and supplements, penetrating other ASEAN markets. It is owned by Beatrice Campos and Mariano Tan.

SM Group of Companies - SM (ShoeMart) is the Philippine's largest retail company. It was founded by the current richest man in the Philippines, Henry Sy, who is of Filipino-Chinese descent. The group of companies is comprised of shopping malls, retail outlets, property developments, banking and financial institutions.  Henry Sy started SM as a small shoe retail store in Carriedo, Manila in the 1950s.

San Miguel Corporations - The company is the largest beverage, food and packing company in the Philippines. It was founded as a brewery in 1890 and now boasts of more than 100 plants and facilities in ASEAN, China and Australia. Its subsidiaries are Ginebra San Miguel, San Miguel Beer, Coca-Cola Bottlers Philippines Inc., San Miguel Packaging Products, Purefoods-Hormer Company and more. The company is owned by Eduardo Cojuangco.

Jollibee Foods Corporation - This is the mother company of the Philippine counterpart of McDonalds Fast Food chain. The first Jollibee outlet was established in 1975 in Cubao, Quezon City. What started out as a small burger joint grew into a food empire with subsidiaries such as Greenwich Pizza, Red Ribbon Cakes and Mang Inasal. To date, there are more than 600 Jollibee outlets all over the world. The company is owned by the 11th richest man in the Philippines, Tony Tan Caktiong.

Ayala Corporation - This company serves as the holding company of Ayala Group's diverse interests. Founded in 1834 by the Ayala and Roxas families, Ayala Corporation is the oldest and largest company operating in the Philippines. It has interests in retail, real estate, telecommunication, banking, renewable energy, water infrastructure, electronics, business process outsourcing, information technology and more.  The company is presently headed by Jaime Augusto Zobel de Ayala, who is currently the 6th richest man in the Philippines.

Philippine Long Distance Telephone Company - PLDT is the Philippine's largest telecommunication provider. It was incorporated in 1928 after four telephone companies owned by U.S. entities merged.  The company includes fixed lines subsidiaries, information and communications technology and wireless companies like Smart Communications, Inc. Its present CEO is Napoleon Nazareno with Manuel Pangilinan, the 50th  richest man in the Philippines, as the major stockholder.

Success stories such as these are inspiring. With inspiration, hard work and dedication, anything is possible. Today is a good time to think of the future. Contact Servcorp now. 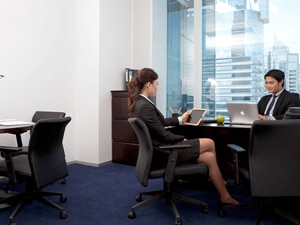