If you are a business relocating to Manila and want the best kind of comfort and convenience in your new office that is going to be set up, consider hiring one of the premium executive suites available in Manila. Add the excellent service and the staff willing to cater to every need of yours, you may feel even more comfortable than you do at home!

Makati City - The financial capital of The Philippines

Makati City, in the Philippines, is one of the seventeen urban centers that define Metro Manila. It is the financial, commercial and economic hub of the city with a maximum number of multinational and local companies. Also, Makati is well known for its top notch shopping and department stores and houses many prominent national embassies, banks and other corporations. The Philippine stock exchange (PSE) is located in this vibrant city's Ayala Avenue. While being called the Financial Capital of the Philippines, Makati is also famous for its highly cosmopolitan culture and lavish executive offices.

The Ayala Triangle is one of the sub-districts of the central business district of Makati, comprising mainly the land between Makati Avenue, Ayala Avenue and Paseo de Roxas, as well as the buildings on those streets. Legazpi Street and Paseo de Roxas to the north, Arnaiz Avenue to the west, Epifanio de Los Santos Avenue (EDSA) to the south and Ayala Avenue to the east, girdle this area. Many major businesses, banks, and other multinational companies are located in this place. Also, the area is catered by the Ayala MRT station of the MRT line 3.

The Ayala Center is also known for its extensive assemblage of shopping, entertainment, and cultural offerings, making it a premier shopping and cultural district of the metropolis. The vast complex with expensive malls encases cinemas, local and international shops, homegrown restaurants and international food chains. The Greenbelt Park is one of the oldest shopping centers located in this area. The lifestyle of people is highly influenced by the high-end malls and shopping centers in this area.

The mall is owned by the Zobel de Ayala family and operated through its holding company, the Ayala Corporation. The mall is divided into five sections (named Glorietta 1–5) and contains many shops and restaurants, cinemas, a gym, arcades and a large central activity center, often used to stage events. An executive office in this mall gives you not only a prestigious business address, but also the exposure required to take your business forward.

Hiring an executive suite in Manila is quite popular among the businesses operating from Manila. With a high presence in Manila, we at Servcorp are the leading provider of luxury executive suites in Manila. You can count upon our reputation for quality services at charges that easily fit your budget. Just give us a call at +63 2 755 6500 and allow one of our executives to find the most suitable executive suite for you in Manila. 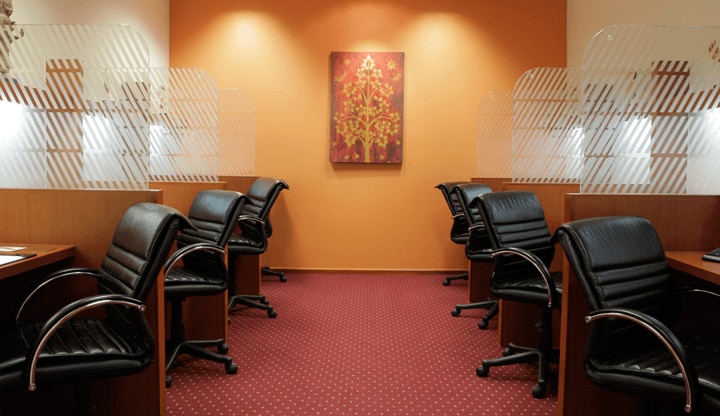